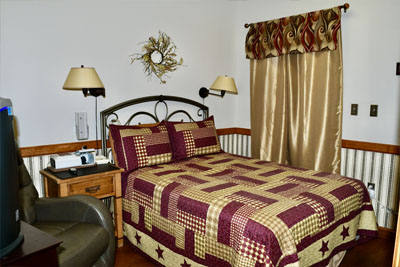 A polysomnogram is a sleep study conducted in a facility in which the patients stay overnight under the supervision of a trained sleep technologist.  Many lines of data are collected, and this is probably the most reliable sleep study.

Sensors or electrodes collect information from the brain, producing an EEG (electroencephalogram). From the EEG, it may be determined whether the patient is asleep or awake.  If asleep, the stage of sleep is then determined and whether REM (Rapid Eye Movement) is present, which is when dreaming usually occurs.  Clearly, sleep apnea refers to events during sleep, not wakefulness, and sleep apnea is usually worse during REM.  The EEG can also detect seizures that may be confused with other sleep events such as REM Behavior Disorder that also has a characteristic EEG pattern.  Other illnesses such as Fibromyalgia have a recognizable pattern.  It is best to collect EEG data in a facility, since portable or home testing is often not adequate and overall not cost-effective.  A trained sleep technologist must apply the sensors or electrodes and maintain them throughout the night.

Sensors are placed slightly in the nose (like oxygen cannulas) and partly over the mouth (to detect mouth breathers). In this way, airflow or air passing in and out of the nose and mouth is recorded. This data is combined with information from belts around the chest and abdomen that indicate air moving in and out of the lungs or effort of breathing. If there is no air flow at the nose/mouth (apnea) but the belts indicate chest and abdominal effort, then this is an obstructive apnea, or obstruction in the back of the throat.  If there is no airflow and no belt motion or lack of any breathing effort then this is a central apnea, or the brain did not give an adequate command to breathe.   It is important to distinguish between these two apneas, since they are treated differently.  Obstructive apneas characteristically involve snoring, while central apneas usually do not.

A very important sensor, an oximeter, is placed over a finger to detect oxygen saturation and pulse. Apneas (by definition, lack of breathing ) can lower oxygen if they last long enough, usually more than 10 seconds.  A patient with obstructive sleep apnea will intermittently lower his or her oxygen saturation during the night, especially during REM and while supine (lying on his or her back).

An electrocardiogram (EKG or ECG) is also recorded, since apneas can lead to arrhythmias, in particular Atrial Fibrillation, which needs to be treated. 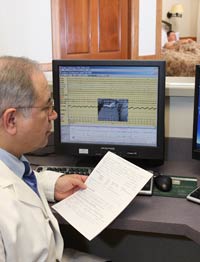 Sensors are placed over the legs to detect leg movements that can disturb the patient's sleep. The wires from these sensors are all placed on a jack box and this in turn is plugged into an amplifier. Then the signals are transmitted to a computer.  If a patient has to go to the bathroom, it takes only a few seconds to unplug the jack box and place it around the patient’s neck like a large necklace, and the patient can go to the bathroom. 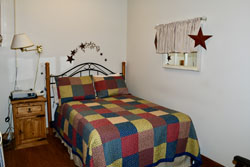 Usually the patient arrives at the sleep lab in the early evening and leaves in the early morning.  Sensor paste in the hair and body can easily be removed with water.  In our laboratory we do not use oil-based glues to hold sensors or electrodes in place.

Some patients worry about not being able to sleep at the lab, but more than 90% do, since sleepiness is one of their main complaints to begin with.  Rarely, a mild, short-acting, modern sleeping pill that minimally affects the sleep information obtained is used to induce sleep.

Polysomnograms can be done to diagnose sleep problems, treat them, or follow up and monitor them. Often, a diagnostic study is done to document sleep apnea and its severity, and then a titration (therapeutic study) is done, whereby PAP (either CPAP, continuous positive airway pressure, or "BIPAP," bilevel positive airway pressure) is used to control the sleep apnea. Sometimes, both may be accomplished in one night using a split night study. In a split night study, half of the study is diagnostic and the other half is therapeutic, but the study is performed in a single night.  The right conditions must be present in order to be able to conduct a split night study.